The first weeks of September have proven to be busy in the tropics. Three hurricanes have rolled off of the coast of Africa, and are being monitored closely.  There is also an area of development being watched in the U.S. Gulf.

None of the hurricanes have made landfall to date, however this will change in the coming week. 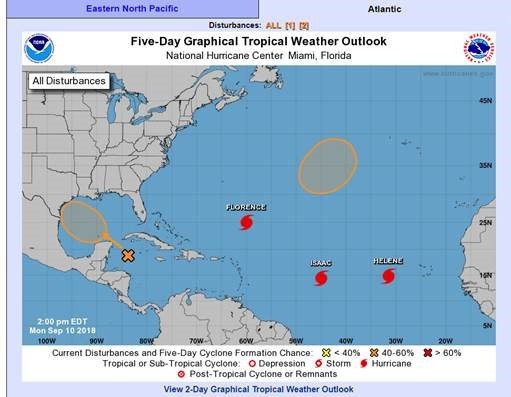 Due to a high pressure system from the north, Florence has been pushed toward the east coast U.S. The storm is set to make landfall Thursday 13 September 2018 as a Cat 4 or 5. The projected path of the storm ranges from Virginia to South Carolina. Wind speeds are expected exceed 120 MPH, and system looks to stall over the east coast and remain in the area until Saturday. An estimated 30 inches or more rain is expected due the system stalling.  The radius of the storm is 200 NM.

Media outlets are reporting Florence will be a hurricane of “catastrophic magnitude”, and “massive inland flooding”.

The USCG has issued a warnings for Virginia, North Carolina, South Carolina. All three states have received and executive order declaring a state of emergency. Mandatory evacuations are starting Tuesday September 11th.

Inchcape offices will be closed until the order has been lifted. However, staff will be monitoring all e-mails.

“The Hurricane Center currently has Hurricane Florence tracking west-northwest with the potential of tropical storm force winds reaching the coast of South Carolina early Thursday morning, September 13. With that in mind, please be advised that port condition X-Ray will likely be set by 0800 Tuesday morning, September 11. If this is the case, a follow on email along with our Port Condition Marine Safety Information Bulletin (MSIB) will be provided to all parties on this distribution list. The associated MSIB will also be placed on Sector Charleston's HOMEPORT site at https://homeport.uscg.mil/port-directory/charleston.”

In preparation for Hurricane Florence, the Captain of the Port (COTP) has set Port Condition Whiskey.  For the safety of the port and the ships in the port, the COTP urges all ships at anchor near Cape Charles to depart either to sea or to a facility that will agree to have them moored throughout the passage of Hurricane Florence.  Departure of ships from the Cape Charles area should be coordinated with the Virginia Pilot Association beginning tomorrow (Monday September 10) with all ships leaving their anchorage no later than Tuesday September 11. Ships should be prepared for 7-10 days of storm evasion and wait until post-storm recovery efforts allow for inbound traffic again.

Incoming ships expecting to anchor in Cape Charles Anchorage upon arrival are urged to remain at sea until the passage of Hurricane Florence unless specific arrangements are coordinated with this office. Ship operators are requested to communicate their intentions to me through their agents by emailing HamptonRoadsWaterways@uscg.mil. Any ships not communicating their plan to us or remaining at anchor after September 11 without coordination with the COTP can expect a COTP Order directing movement to ensure the safety of the port as this major hurricane approaches. 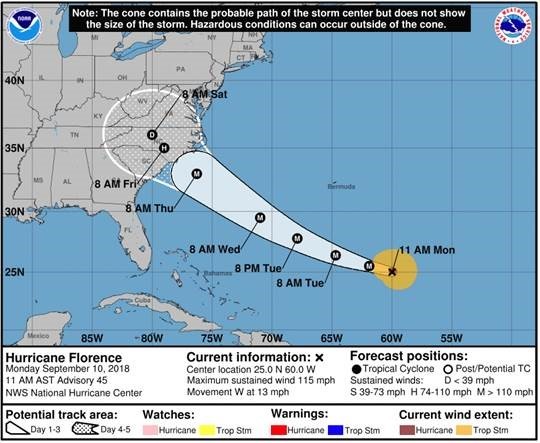 Helene is a Cat 2 hurricane, and set to take a due north course. There are no coastal watches or warning advisories in effect. Movement is west northwest at 14 knots

Hurricane Isaac is a Cat 1 hurricane with sustained winds of 75 mph. Isaac is moving westerly at 12 knots heading toward the Lesser Antilles. The storm is expected to move into the Caribbean Sea Thursday September 13th.   There are currently no coast warnings or watches in effect. The storm continues to show slight increase in speed, but is expected to slow by the middle of the week. 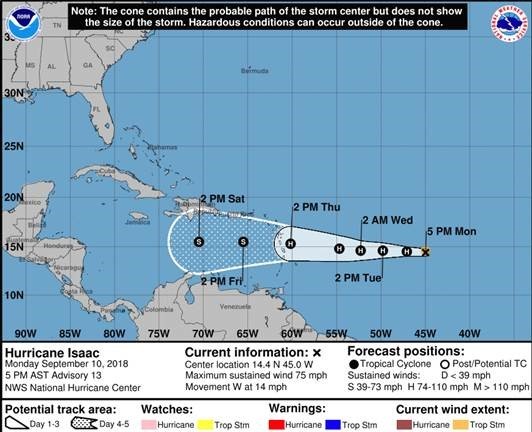 There is an area of development being monitored in the Gulf near the Yucatan Peninsula that will move into the Gulf. The system has a 50% chance of development within the next 5 days. The system is showing signs of organization Wednesday September 12th. The area is projected for the Texas coast. Heavy rains and wind gusts are expected for Cuba Tuesday, with a tropical formation expected by the end of the week.

Further updates will be posted as they are received.

Email ISS.NorthAmericaIntel@iss-shipping.com to be added to the hurricane report distribution list.