We have received updates on today’s Hurricane Report. Please see below in italic.

At 2000 EST on September 12, 2018 Coast Guard Captain of the Port (COTP) Charleston, South Carolina will set Port Condition YANKEE for coastal South Carolina.  Threatening winds (34 kts/39 mph) from (tropical storm/hurricane name as appropriate) are possible along the coast of South Carolina within 24 hours.

Port Status: Coastal South Carolina ports are open to outbound vessel traffic only.  Commercial inbound vessels are restricted from entering the port, and are advised to seek an alternate destination unless expressly authorized by the COTP Charleston or a designated representative.

All oceangoing commercial vessels and oceangoing barges greater than 500 gross currently in port should make preparations to get underway at this time.  Vessels authorized by the COTP to remain in port shall, in accordance with their safe mooring plan, take appropriate precautionary measures to secure their vessels.

Facilities shall follow their approved heavy weather plan and take all necessary precautions to adequately prepare for the forecasted conditions.  Appropriate container stacking protocols must be finalized.

Pleasure craft are advised to seek safe harbor.  Commercial vessel operators authorized by the COTP to remain inside Sector Charleston’s harbors, and recreational boat owners, should ensure their vessels are secure at berth and will not pose a hazard to surrounding vessels, the navigable channel, or the environment. Mariners are reminded that drawbridges may not operate when sustained wind speeds reach 25 mph or when an evacuation is in progress.

Please see the following information from Odfjell Terminals:
In anticipation of Hurricane Florence and its possible impact to Charleston and its surrounding areas, the Governor of South Carolina issued a mandatory evacuation of South Carolina which went into effect yesterday at noon on September 11th.

Consequently Odfjell Terminals (Charleston) (OTC) hereby declares a force majeure (FM) starting with immediate effect. This FM event is expected to result in limited or no service to OTC’s customers for the next several days, and will continue until conditions improve. The terminal will remain closed until the mandatory evacuation is lifted and the storm has passed. At that time we will commence damage assessment and initiate recovery and start-up plans

Hurricanes have proven once again to be an unpredictable force of nature. Florence has taken a turn towards southern east coast, and new preparations have started in South Carolina and Georgia, states thought be outside of the cone 24 hours ago. Outer bands will reach as far south as Florida. Virginia is out of the cone from a direct hit, but will still feel the effects in sizeable waves and some storm surge. The storm surge determines how deep the high the tide comes inland. Two new areas of interest have been identified in the Atlantic with 20% or greater change of development. We will monitor these systems closely and update accordingly. This brings the tropical disturbance count to an unprecedented 6 storms 3 are named, one “Invest”, and two potential for development.

New evacuations have been made in light of the current change in patterns. Ports will change status determined by the U.S. Coast Guard (USCG).

Port Conditions used by the USCG are as follows:

Oil & Gas Impacts
Gasoline prices are expected to temporarily rise at the pump on the east coast. Depending on the impact of the storm, distribution terminals will be shut down in the mid-Atlantic. Colonial Pipeline, the main conduit for moving gas and diesel from Houston to New York, run though North Carolina, as does Kinder Morgan’s Plantation Pipeline. More can be read here.

Electrical Infrastructure Impacts
Utility services are preparing for the worst, and hoping for the best. Energy companies are making preparations for what is being called, “a historically bad situation”. Energy disruptions are expected for days and potentially weeks. Duke Energy of the Carolinas is marshaling repair crews from other parts of the U.S. But the flooding could be issues for natural gas service, water districts, meters and appliances. More on this here.

Travel
In order to make sure every can evacuate the eastern seaboard safely, highway reversals have been put in place for those under mandatory evacuations. This means the highways and freeways are open for traffic to drive the wrong direction away from the path of the storm. It increases the flow of traffic, and helps reduce bottlenecks that cause major traffic delays on a “normal” day. More than 300 flights have been canceled so far. Airlines are waiting date-change, baggage fees and pet fees.  Some airlines are adding additional seats to service ahead of the storm to assist with evacuations and keeping people from getting stranded in airports. Flight disruptions are expected to continue after to storm has passed.

The storm is expected to slow down to a Category 3, however forecasters are expecting the storm to jump back up to a Category 5 (winds of 130 mph; 200 km/h).

Florence took an unexpected turn south toward South Carolina and Georgia. The storm is still expected to stall, however it is unsure if it will stall near the coast or inland. She is still on track to arrive late Thursday September 14th. Tropical storm winds 75 mph, will arrive Wednesday around 20:00. 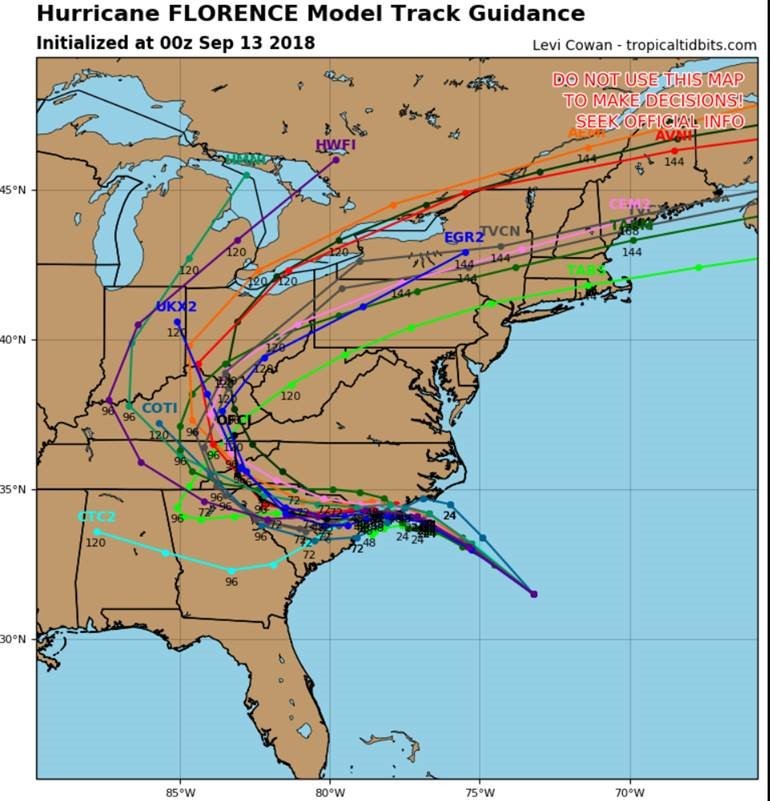 Savannah Georgia was put under a state of emergency today due to the shift.

They are still operating under Condition Whiskey until approximately tomorrow morning, September 13th.  Port conditions are expected to escalate tomorrow if the shift south continues.

The Inchcape office will remain open until an official decision is made tomorrow morning based on storm trajectory.

Special note – Hurricane Florence:
The port of Virginia is open to vessel traffic and waterfront activities within port limits, but closed to inbound and outbound traffic at the Virginia Capes. Subject to adjustment, the port will close to all traffic effective Wednesday 12 Sept. 12:00.  Inchcape’s Norfolk office is in Zone A, mandatory evacuation.

Due to the projected path of Hurricane FLORENCE and the evacuation of Coastal Carolina counties, the draw bridges listed below will be closed to all marine traffic beginning at 12:00 p.m. on September 11, 2018. Mariners are urged to prepare and plan transits accordingly to avoid unnecessary disruption.

A TROPICAL STORM WATCH IS IN EFFECT FOR...

Helene
No new information at this time. This hurricane still poses no threat to coastal communities.

Isaac
Hurricane Isaac is set on the same westerly track. The system is expected to dissipate over the Lesser Antilles, however future tracks now show a trend for a north/northwest shift. This mean the storm will head into the Gulf of Mexico. However, it is still unknown if it will regain strength and speed once it moves past the Yucatan Peninsula. 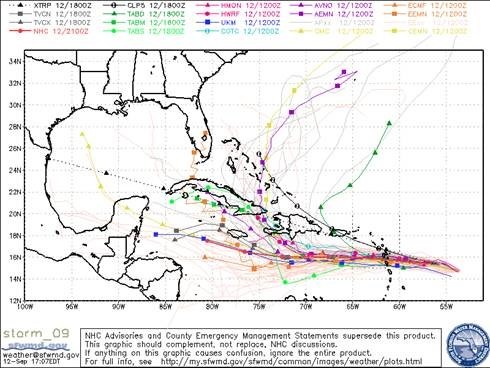 Still not a named storm, projected paths have moved the landfall to the Texas/Mexico border. The system is no longer a concern for a major storm. The USCG held a meeting today at 09:15, and state “worst case the impact is a tropical storm”. Corpus Christi and Brownsville remain at Port Condition X-Ray (as a precaution only) unless conditions change in the next 48 hours. Seas are expected at 4 – 6 feet. Major impacts will be heavy rain and coastal flooding. 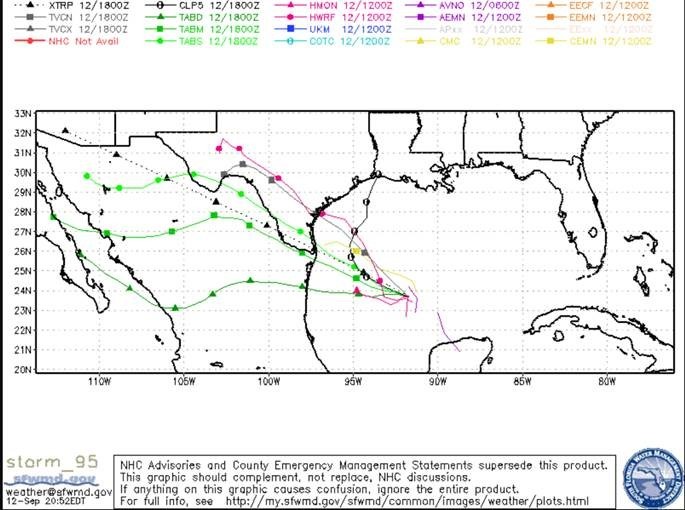