As Florence churns towards the Carolinas, Hurricane Joyce forms over the eastern Atlantic north of Helene. Helene shows to become a threat to Ireland and parts of the U.K. as early as Tuesday September 18th. Subtropical Storm Joyce was also named today.

Florence yet again gone against the grain of predictions, and will downgrade to a category 2 before it makes landfall. The greatest threat is the flooding due to the system stalling. Over 30 inches have been predicted in some areas. The storm has been compared to Harvey that hit the Texas coastline in August 2017, and dumped 60 inches Houston and surrounding areas. 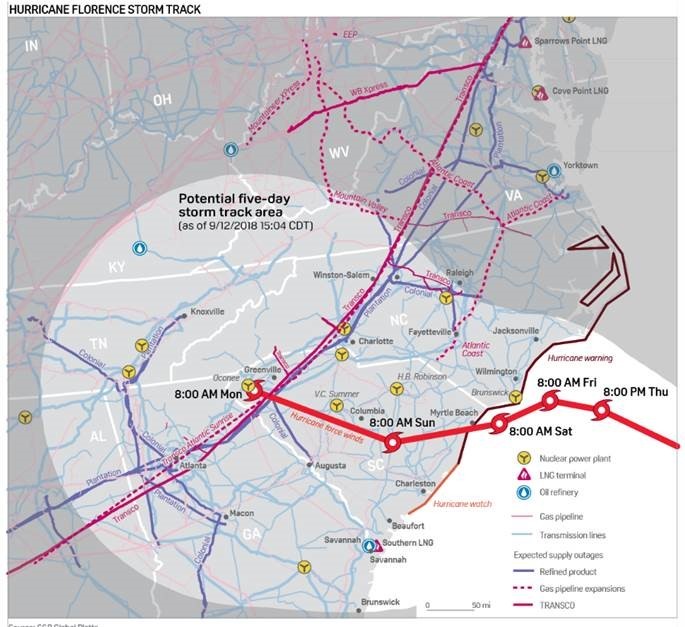 Oil & Gas Impacts
Fuel retailers have been given the green light to sell winter-grade gasoline in the Carolinas by the US Environmental Protection Agency ahead of Florence.  This will allow supply to meet the demand for the mandatory evacuations still in place. Gas hoarding is common during storms, and people stock up due to limited supply, and lengthy power outages. U.S. refineries have been running 100% of capacity for the past few months. There are currently no offshore or onshore productions rigs in the path of Florence. As of yesterday, the pipelines were operating normally, but continuation greatly depends on the impact the storm has on the east coast. More details on the pipeline and delivering product to areas like the New York Harbor can be found here. The LNG segment could also be impacted. Cove Point terminal in Maryland has activated its severe weather preparation and response plan. Elba Island terminal in George is to remain fully operational, however any construction on the terminal will cease. Kinder Morgan expects to experience temporary shut downs to their liquid bulk terminals from South Carolina up to Virginia. More LNG market information can be found here.

Electrical Infrastructure
Power outages are being reported even before the storm makes landfall. Over 4,000 outages have already been reported, and that number is expected to increase in the next 24-48 hours. This is in conjunction with street closures due to flooding and down trees. Governor Roy Cooper has sent Tweets stating “I believe we have the resources we need to meet this crisis”. However, the timeline to get operations back up and running to “normal” is unknown at this point.

Travel
More than 1,300 flights have been canceled. Outer bands with tropical force winds have started, and operations in airports have been suspended. American Airlines, Delta, Southwest, United, Alaska Airlines, JetBlue Airways, and Spirit Airlines have posted information online about cancelations and free flight changes to affected areas. Airfares will be capped below what last minute tickets would cost, this is due to alleged price gouging before Hurricane Irma in 2017. Winds and tidal surges are the biggest issues for airports in coastal areas.

Florence
Good news/bad news. The good news is Florence is now downsized to a category 2 hurricane with max sustained wind speeds at 110 mph (155 km/h). The bad news is, the storm will stall along the coast, and dump 30 + inches of rain, and tornados are expected far inland as the outer bands come ashore.

Port conditions remain at Zulu until further notice. The National Hurricane Center issued the below statement for September 13th.

A TROPICAL STORM WARNING HAS BEEN ISSUED FROM SOUTH OF SOUTH SANTEE RIVER TO EDISTO BEACH SOUTH CAROLINA. 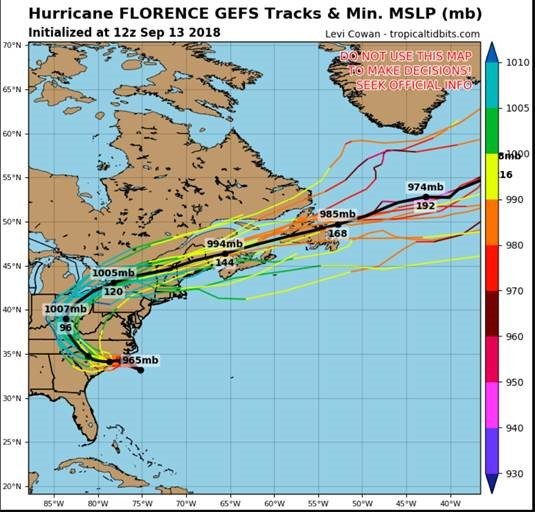 Isaac
Isaac seems to be “behaving” and following earlier predictions of slowing down. The hurricane is now down sized to a Tropical Storm, and remains on it’s previous predicted track. All watches and warnings have been discontinued until further notice. Forecast calls for decrease in forward speeds, and will move into the eastern and central Caribbean over the weekend. This does not mean this storm is not a potential threat. Once it gets into the Gulf, it could pick back up again due to warm waters.

Helene
Currently maximum sustained wind speeds are 65 mph (100 km/h). The storm is heading northwest towards Europe, and is expected to affect Ireland and parts of the U.K early next week. Currently, the Azores Islands have a Tropical Storm Warning in place.

...TROPICAL STORM WATCHES ISSUED FOR THE AZORES ISLANDS FOR
HELENE...

WATCHES AND WARNINGS
CHANGES WITH THIS ADVISORY:

The Government of Portugal has issued a Tropical Storm Watch for all of the Azores Islands.

A Tropical Storm Watch means that tropical storm conditions are possible within the watch area, generally within 48 hours.

DISCUSSION AND OUTLOOK
At 500 PM AST (2100 UTC), the center of Tropical Storm Helene was located near latitude 26.3 North, longitude 37.0 West. Helene is moving toward the north near 21 mph (33 km/h).  The system is expected to accelerate and turn toward the northeast by Monday.  On this forecast track, Helene will be crossing over or near the Azores late Saturday or Sunday.

Maximum sustained winds are near 65 mph (100 km/h) with higher gusts.  Little change in strength is forecast during the next 48 hours.

Tropical-storm-force winds extend outward up to 140 miles (220 km) from the center. 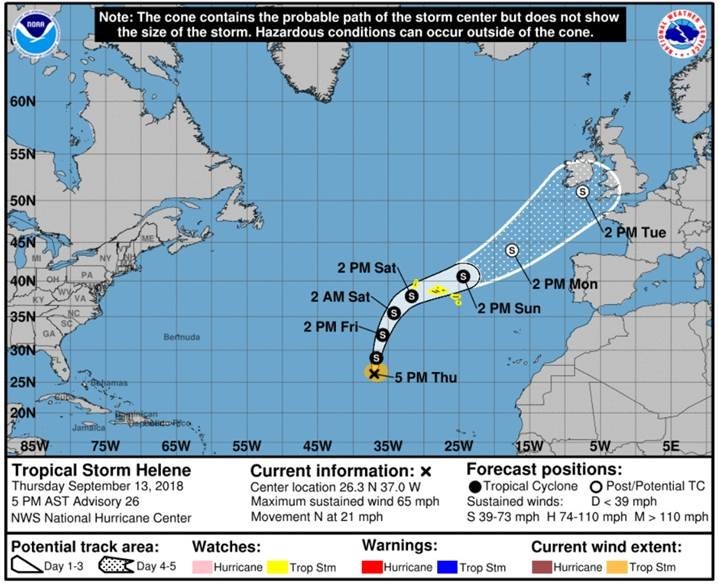