Tropical Storm Sally is in the western Gulf of Mexico, and is moving slowly WNW at 9 mph (14 kmh).

Sally is expected to become a hurricane within the next 24 hours, and make landfall near New Orleans Louisiana by Tuesday afternoon. Some local officials are expecting a possible category 2 hurricane.

Rainfall totals in Florida over the weekend were over 9 inches (22 cm). However Louisiana could see up to 20 inches (50 cm) in some areas as Sally makes landfall.

Sally is the 18th named storm of the record breaking 2020 hurricane season.

The port of New Orleans is now PORT CONDITION YANKEE.

The following was issued for Mobile Alabama

The USCG Sector Mobile COTP has targeted 1200 hrs., Monday, Sept. 14 to set PORT STATUS ZULU for the Port of Mobile westward.  Look for an MSIB sometime tomorrow morning.  Because of the rain and localized flooding risks, the Alabama State Port Authority will discontinue cargo deliveries and receipts at 0600 hrs., Monday September 14. The schedule allows us to complete terminal preparations.  The sea state offshore at this writing is at 6.5 ft. and climbing.  The Pilots are planning to end vessel transits around 1800 hrs. this evening.  As conditions evolve, we will post additional information as it becomes available.

The NHS has issued the following watches and warnings:

...SALLY FORECAST TO STRENGTHEN AND SLOW DOWN...

* East of Ocean Springs to the Alabama/Florida Border 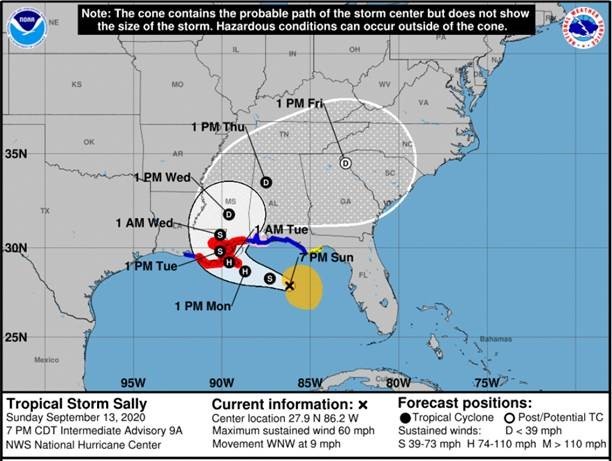 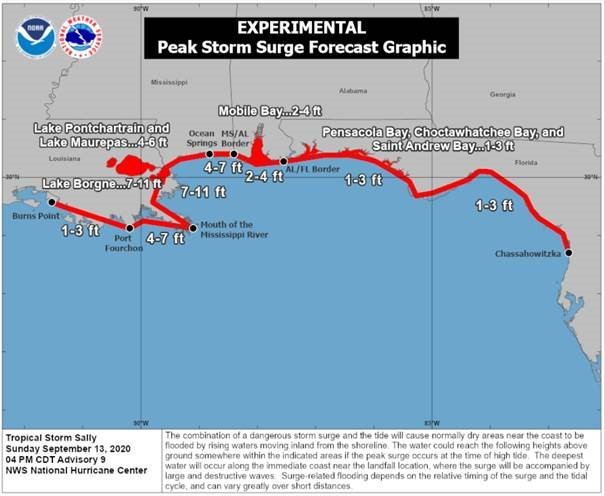 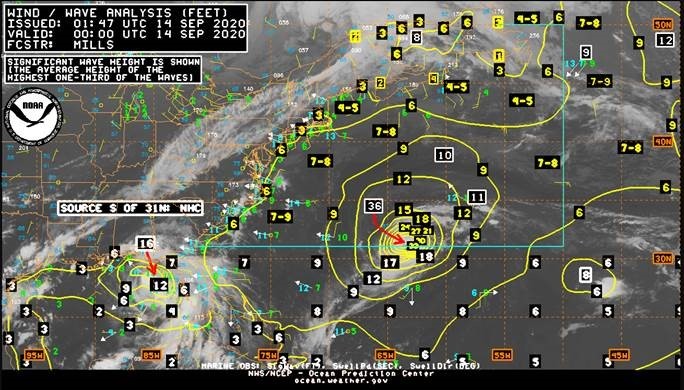