Further to the below, please note the below received from the Galveston / Texas City pilots –

In preparation for Hurricane Delta, port conditions have been updated below. Landfall is expected Friday 9th October afternoon or early evening. The National Hurricane Center has issued possible hazards that include storm surge, damaging winds and tornadoes.  Wave heights near the center of the storm are being recorded at 35 feet (10.67 meters) 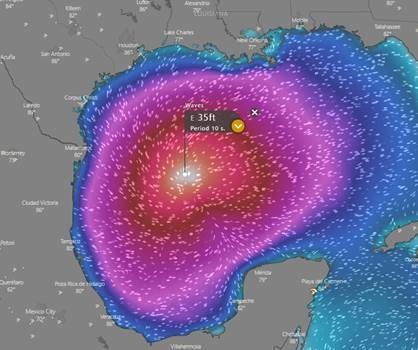 The Louisiana Governor, John Bel Edwards, has declared a state of emergency ahead of the storm, and evacuation orders have been issued. The eye of the storm is expected to make landfall near Lake Charles, in an area that has not recovered from Hurricane Laura. 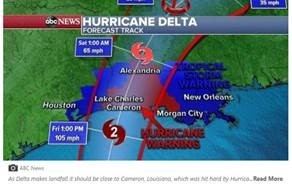 New Orleans will not get a direct impact from the storm, however there is hazardous storm surge potential of up to 5 feet (1.52 meters).  Galveston Texas could see storm surges of around 3 feet (0.91 meters). 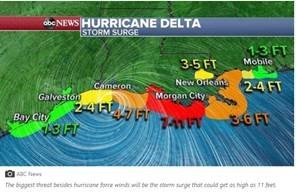 USCG Sector Houston has issued a modified Port Condition Yankee as of 1000 / 8 Oct in relation to Hurricane Delta for the ports of Houston, Galveston, Texas City, and Freeport.  Heavy weather from Hurricane Delta is expected to make landfall within 24 hours. A temporary safety zone is in effect for that portion of Sector Houston-Galveston’s Captain of the Port Zone (as defined in 33 CFR 3.40-28). The COTP is not currently considering closing the port due to low probability of sustained hurricane force winds. (attached MSIB)

Please note the below update received from the Houston Pilots -

The USCG Sector Mobile Captain of the Port has set Port Status WHISKEY .

At 0800 local time, October 8, 2020, in preparation for the approaching Hurricane DELTA, the Captain of the Port (COTP) New Orleans will set Port Condition YANKEE in accordance with the Maritime Hurricane Contingency Port Plan (MHCPP)

They do not plan to evacuate personnel or equipment at this time.

If conditions worsen to where operations are unsafe, pilots will shelter in place until conditions improve.

All vessels entering and departing the COTP Zone New Orleans are reminded to update their Notice of Arrival with any changes to their arrival or departure information (33 CFR 160.208 and 33 CFR 160.212).  The COTP has also outlined specific port preparation requirements and recommendations in the MHCPP.

Mariners are advised that drawbridges will close when wind speeds exceed 35 mph or once evacuation begins.  As a result, mariners are urged to seek passage through drawbridges well in advance of the arrival of gale force winds.  For most up to date bridge information please contact Coast Guard District Eight Bridges at D8DPBALL@uscg.mil.

Vessel owners and operators are reminded of the “Mile Marker (MM) 73 Memorandum of Agreement (MOA)” providing barge fleet owners and operators with policy and guidance for the fleeting of barges in this area during hurricane season.  At this time, the Coast Guard does not intend to implement the safety zone for river evacuation below MM 73.  However, these requirements will be discussed on the Port Coordination Team conference calls and reassessed as needed and barges should be moored in accordance with the standards set forth in the MOA (found at https://homeport.uscg.mil/port-directory/new-orleans).

Port partners and mariners are cautioned that the COTP New Orleans may quickly set Port Condition ZULU as the situation develops.  You are strongly encouraged to review your existing hurricane plan, take actions to minimize risk, and be prepared to evacuate, if necessary. For recommended precautionary measures and storm preparation checklists refer to MHCPP found at https://homeport.uscg.mil/port-directory/new-orleans. Vessels intending to remain in the port must submit a Remaining-in-Port Checklist to the Vessel Traffic Service Lower Mississippi River (VTS) as listed below.

...HURRICANE CONDITIONS AND LIFE-THREATENING STORM SURGE EXPECTED TO BEGIN ALONG PORTIONS OF THE NORTHERN GULF COAST ON FRIDAY...

A Storm Surge Warning is now in effect for the Texas coast from High Island to Sabine Pass.

A Hurricane Warning is now in effect for the Texas coast from High Island to Sabine Pass.

* East of Morgan City Louisiana to the mouth of the Pearl River, including New Orleans

* East of the mouth of the Pearl River to Bay St. Louis Mississippi

TORM SURGE:  The combination of a dangerous storm surge and the tide will cause normally dry areas near the coast to be flooded by rising waters moving inland from the shoreline.  The water could reach the following heights above ground somewhere in the indicated areas if the peak surge occurs at the time of high tide...

Port Fourchon, LA to the Mouth of the Mississippi River...4-6 ft

Mouth of the Mississippi River to Ocean Springs, MS...2-4 ft

The deepest water will occur along the immediate coast near and to the east of the landfall location, where the surge will be accompanied by large and dangerous waves.  Surge-related flooding depends on the relative timing of the surge and the tidal cycle, and can vary greatly over short distances.  For information specific to your area, please see products issued by your local National Weather Service forecast office.

RAINFALL:  Friday through Saturday, Delta is expected to produce 5 to 10 inches of rain, with isolated maximum totals of 15 inches, from southwest into south-central Louisiana. These rainfall amounts will lead to significant flash, urban, small stream flooding, along with minor to isolated moderate river flooding.

For extreme east Texas into northern Louisiana, southern Arkansas and western Mississippi, Delta is expected to produce 3 to 6 inches of rain, with isolated maximum totals of 10 inches.  These rainfall amounts will lead to flash, urban, small stream and isolated minor river flooding.

As Delta moves farther inland, 1 to 3 inches of rain, with locally higher amounts, are expected in the Ohio Valley and Mid Atlantic this weekend.

TORNADOES:  A few tornadoes are possible late tonight through Friday over southern parts of Louisiana and Mississippi

SURF:  Swells from Delta will begin to affect portions of the northern and western Gulf coast later today. These swells are likely to cause life-threatening surf and rip current conditions. Please consult products from your local weather office. 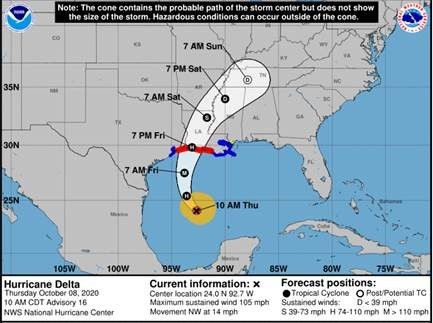 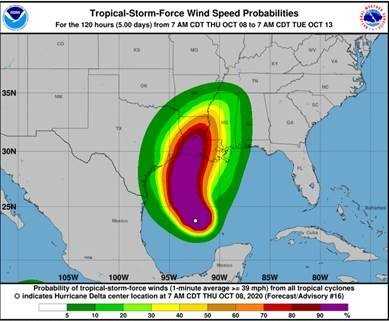 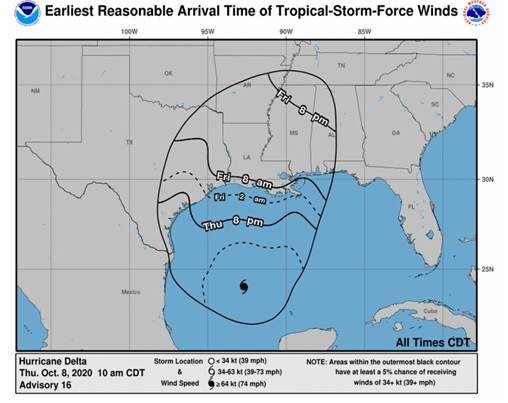