All ports are now open and full operational.

“Path of destruction” is an understatement. Hurricane Michael was the 3rd most powerful storm ever recorded to hit the U.S. mainland. The monster storm left devastation, and flatten entire towns along the coast. Families have lost everything, and this is only the beginning.

Michael finally moved back out into the Atlantic, and recovery is going to be a long process. Rescue crews are still working around the clock to fully assess damage. Updates are coming in frequently and the current death toll is at 13.

An estimated 1.5 million people from Florida, Georgia, South Carolina, North Carolina, and Virginia are currently without power. Factoring in residents in Florida that have already had power restored, there were over 2 million total outages recorded. Disaster response teams from all over the country have been deployed, however it will be weeks until residents and businesses are fully restored. Ariel footage of damage can been seen here.

Tyndall Air Force Base in the Florida Panhandle took a huge hit that will cost the US government several million dollars in repair. You can see before and after photos of the air force base here.

The current track takes the storm from the North East US Coastline to Europe around 0200 Monday. Winds are at 65 mph00 km/h), and the system is moving east north-east at 29 mph (46 km/h). 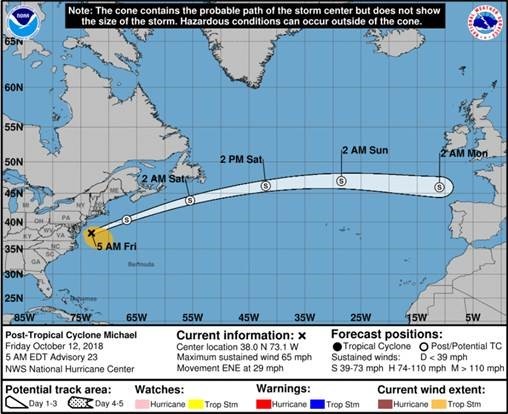 Travel
Travel remains limited. Travelers are being urged by airlines and government entities to avoid travel to the area for safety reasons. Roads and infrastructure has been compromised.
Delays, cancellations by destination, airline and airport origin globally can be located here.

Jacksonville – Office is open. Port is open with no restrictions.

Brunswick – Office (Sav) is open. Port is open with no restrictions.

Savannah – Office (Sav) is open. Port is open with no restrictions

Charleston – Office is open. Port is open with no restrictions.

Morehead City/Wilmington NC – Office is open. Awaiting word from USCG and Pilots this morning on when Port Wilmington and port Morehead City will be reopened.

Oil & Gas
Operations have resumed following shut-downs earlier this week. BSEE estimated that 40% of the current oil production in the Gulf of Mexico has been shut-in. 29% of natural gas production has been shut in. BP has begun to deploy workers back to platforms after facilities were inspected, and safety assessments were conducted. Undamaged facilities were brought back online as quickly as possible.