TOKYO -- Japan, China and South Korea have become locked in a scramble for limited supplies of liquefied natural gas, sending prices spiking amid a cold snap.

Asian LNG spot prices have roughly tripled over the past month to more than $30 per million British thermal unit. Even as the U.S. Henry Hub spot prices hold steady around $3 per million Btu, the Asian LNG benchmark, which dates back to 2010, sets records on a daily basis.

In Japan -- the world's largest importer of LNG -- such trading houses as Mitsubishi Corp. and Mitsui & Co. that sell the fuel have been inundated with calls from electric companies desperate to get their hands on whatever they can.

The direct cause is the cold wave that has swept over not only Japan, but East Asia more broadly. "When bidding starts for new tanker [cargoes], bids come in right away from China, or from South Korea, which has been switching from coal power to LNG," a source from Mitsubishi said.

But the weather is not the only problem. A longer-term factor is increased buying by China, which is ramping up a pivot from coal to cleaner LNG as it looks to address environmental issues while also maintaining strong economic growth.

Japan accounts for roughly 20% of global LNG imports. China is expected to surpass it within the coming years, possibly giving it an edge in negotiations.

China purchased 59.5 million tons of the fuel from abroad during the first 11 months of 2020, up about 10% from the same period of 2019, while Japan's imports over that time dipped 5% to 66.7 million tons. For December, Chinese imports are believed to have jumped 20% to around 8 million tons, a monthly record and well over Japan's total for the month. Japanese trading houses are looking into purchasing gas from such markets as the U.S. that have a glut, but they face another issue: a shortage of tankers. Cold weather has spurred an upswing in LNG purchases in Europe as well, squeezing global shipping capacity. The cost of shipping LNG via tanker from Australia to Japan has jumped to $1.45 per million Btu, up more than 50% from a month earlier.

The situation has exposed the inability of Japan's procurement capacity to adapt to difficult circumstances. LNG must be shipped at temperatures of minus 162 C to remain liquid -- and because it gradually boils off, companies cannot build up large stockpiles. The pandemic has led power companies to pare back supplies as well.

Japan depends on natural gas for about 40% of its electricity generation. Major utilities such as Kansai Electric Power have responded to the shortage by seeking LNG from gas companies and having domestic shipments redirected to plants in urgent need of fuel.

Being forced to buy more LNG at a high price "is going to affect our earnings this fiscal year by tens of billions of yen," or hundreds of millions of dollars, an executive at an electric company in western Japan said. Many industry experts do not expect the shortage to be resolved for another month or two.

Cross-border arrangements to share LNG can be difficult because of so-called destination clauses in contracts that bar the buyer from reselling cargoes to a third party.

But gas producers have been making more deals without such restrictions lately, owing partly to the increase in supply from U.S. shale gas. Some industry players say that more frameworks could emerge to enable LNG-consuming countries and companies to share supplies.

TOKYO -- Amid high electricity demand due to unseasonably cold weather and tight liquefied natural gas supply, Japan is scrambling to prevent a national blackout by calling on power companies to generate more and the public to use less.

Peak electricity demand in the country is about 90% more than expected supply on Tuesday and as high as 97% in the northern Tohoku area, according to OCCTO, a Japanese organization that coordinates and oversees power transmission in the country. This unusually cold winter, combined with short supply of solar energy and LNG for thermal power plants, are all factors that have led to such a dire shortage.

The Federation of Electric Power Companies of Japan announced that electricity demand reached a decade high by Friday in seven of the 10 areas across the country. On Sunday, the group called for homes and businesses to cooperate by conserving electricity, as heating demand surged.

The last thing the country needs now is a power outage that could further damage the economy already struggling with a state of emergency brought on by another wave of the coronavirus pandemic.

Members of the federation, formed by major utility companies such as Tokyo Electric Power Company Holdings and Tohoku Electric Power, are expanding their capacities by generating from power plants still under construction and those in testing mode. They are also increasing generation from thermal power plants above their normal capacities. To this end, power plant operator Electric Power Development will start operating its coal-fired power plant using oil from Thursday. The Matsushima thermal power plant in western Japan had halted operation on Jan. 7 due to a malfunction in coal handling equipment.

A federation spokesperson said it was the first time the group was asking residents nation-wide to conserve energy since the Great East Japan Earthquake in 2011 that also led to a devastating tsunami. The earthquake caused a nuclear accident in the Fukushima prefecture which in turn forced all nuclear power plants to stop production.

In Japan's day-ahead energy market which trades over the Japan Electric Power Exchange, the price of electricity topped 100 yen ($0.96) per kilowatt-hour in the past few days. Also, LNG spot prices in Asia have spiked as Japanese electricity companies raced to buy cargoes. 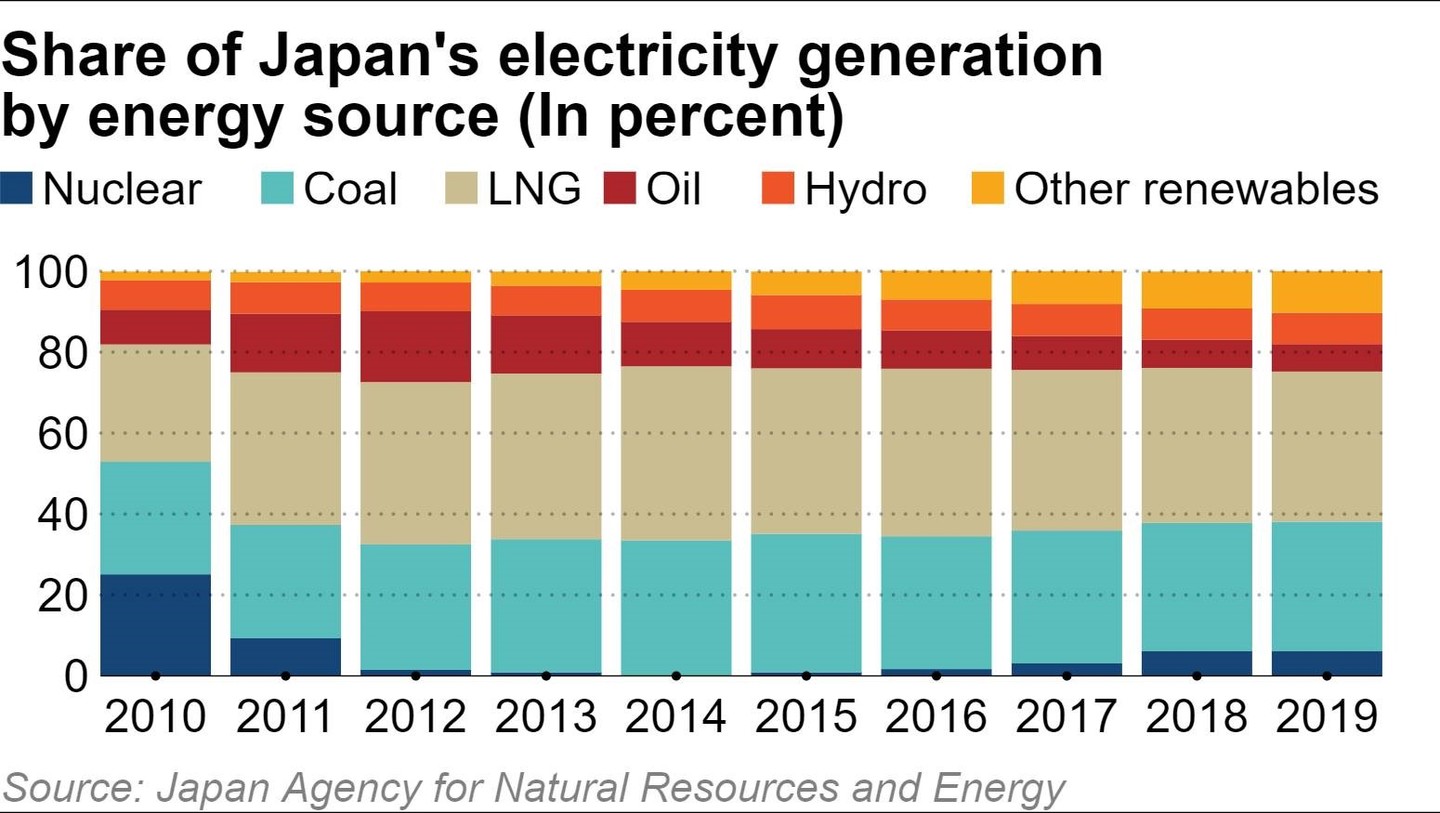 The number of nuclear power plants in operation in Japan has fallen due to strong opposition over safety fears after Fukushima. Japan has since relied more on LNG-, coal- and oil-fueled plants.

But over the next few years, some of those old power plants that came into operation after 2011 to replace the decommissioned nuclear power plants are themselves set to be phased out.

"Between 2021 and 2023, there is an expected drop in the supply of electricity," said Junichi Ogasawara, senior research fellow at the Institute of Energy Economics, Japan.

Until new power plants have been set up, Japan still faces risks of electricity shortage in the future. "Improvement is not guaranteed in the long term, because of [pressures on the use of] coal and diminishing plans for new thermal power plants," Ogasawara added.

Takeshi Kaneda, president of consultancy Universal Energy Research Institute said that "LNG becomes the only option" for Japan in terms of alternatives that provide the same volume of energy facing pressures on using coal.

He said that the dependence on LNG makes Japan vulnerable to energy shortages because the gas cannot be stored for long periods since it evaporates. Imports also have to travel through geopolitical choke points such as the Panama Canal and the Persian Gulf.

There is a worldwide shortage of LNG now due to traffic jams in the Panama Canal and malfunctions in an LNG plant in Australia, a key producer.