TOKYO -- Local Japanese gas companies are shipping unsold inventories to Chinese clients in relatively small amounts now that demand at home has stagnated and parts of China unserved by pipelines are eager to buy.

Shizuoka Gas shipped five 18-ton containers of liquified natural gas last year to the oil major PetroChina on a trial basis. The Japanese company aims to finalize a three-year supply deal later this year, which will transfer tens of thousands of tons of LNG annually.

LNG is normally ferried by large vessels with 70,000-ton capacities. Instead, Shizuoka Gas will parcel out LNG in 18-ton containers to fulfill a demand in China for smaller purchases that has been growing for the past two or three years.

Because many areas in China have no access to pipelines, a large number of traders use trucks or small ships to transport the fuel in the containers.

In Shizuoka Gas's home in Shizuoka Prefecture, demand for gas has dropped off mainly because of factory closures. Shizuoka Gas signed long-term contracts to purchase roughly 1.2 million tons of LNG a year, but sells only 1 million tons in Japan annually.

That leaves 100,000 tons to 200,000 tons of surplus LNG each year. Shizuoka Gas's three-year plan is to sell about 100,000 tons annually in containers to small-lot clients in China and elsewhere.

Chubu Gas signed long-term LNG purchasing agreements, but the utility is losing customers to Kyushu Power, which started selling natural gas after the market was deregulated. To offset this, Chubu Gas will sell unsold LNG to China.

Reselling LNG has become necessary to mitigate extra costs that come with shrinking demand. LNG purchasers are normally required to pay breach of contract fees if they do not claim agreed-upon volumes. Resales have mounted especially among rural gas companies.

Mitsubishi's trading business, which began in 2013, processed nearly 3 million tons of LNG spot trades in fiscal 2018, or three times the volume in fiscal 2017. What was once a roughly 20-person trading desk two years ago has expanded to about 80, forming one of the biggest teams in Japan.

Singapore aims to be Asia LNG hub as demand soars

SINGAPORE -- As demand for clean energy grows in China, India and Southeast Asia, Singapore has ramped up efforts to become a regional hub for liquefied natural gas trading, capitalizing on its location as an established center of finance and trade.

The city-state took another step forward last month when the government expressed interest in building the country's second LNG terminal. The facility could be used to split up large-scale LNG shipments into smaller parcels and supply them to the region.

The new terminal would likely "realize the goal of establishing Singapore as the LNG trading hub in Asia," said Robert Sims, who heads Asia-Pacific gas and LNG research at energy consultancy Wood Mackenzie.

Asian emerging economies will likely grow more reliant on LNG, with China and India already major importers and Vietnam and the Philippines expected to start importing the fuel in the 2020s.

Japan, China, South Korea and India were the world's biggest LNG importers last year, while Qatar and Australia were the top exporters.

Global demand for LNG is expected to grow 3.6% annually to 2035, according to a recent report from McKinsey & Co. "China will be a major driver of LNG-demand growth, as its domestic supply and pipeline flows will be insufficient to meet rising demand," the consultancy said. "Similarly, Bangladesh, Pakistan, and South Asia will rely on LNG to meet growing demand to replace declining domestic supplies."

The Philippines is preparing LNG import facilities, and Vietnam's state-owned oil companies plan to begin importing the fuel in the 2020s. Both countries produce their own gas, but rising domestic demand will outstrip domestic production, forcing them to source from overseas producers. 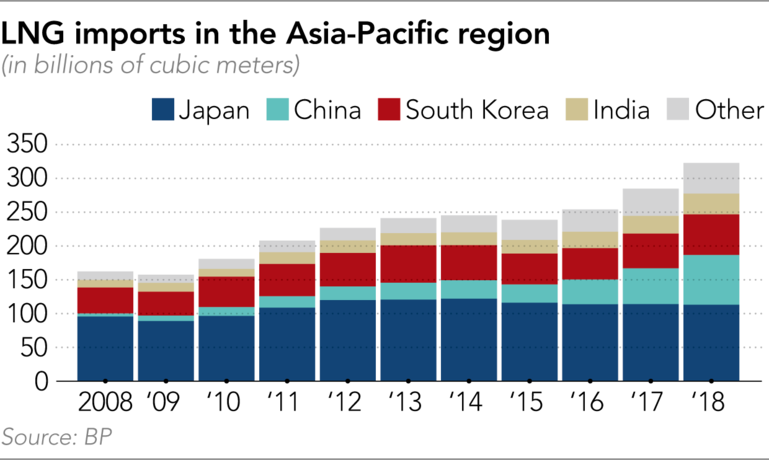 The country currently generates 95% of its electricity from imported natural gas, according to Singapore's energy authority. Indonesia and Malaysia provide 71% of imports via pipeline, with the remaining 29% coming from elsewhere via ship.

But last month, Indonesia said it would stop supplying LNG from Sumatra to Singapore when the current contract expires in 2023, adding that the gas will be diverted to its domestic market. "There is still a lot of gas in Sumatra. Supplies to Singapore will end in 2023 and will be used domestically," Indonesian Energy and Mineral Resources Minister Arifin Tasrif said in a statement.

Increased domestic demand for LNG is unlikely to affect Singapore's goal of making itself an LNG hub, according to Sims of Wood Mackenzie. "However, the requirement for expansion of the existing terminal, or construction of a second facility, along with increased LNG bunkering will naturally help," he said.

London and Rotterdam are global hubs for LNG trading, while Japan and China are vying to become regional hubs for Asia.

Being a hub does not necessarily mean having energy storage facilities. Rather, it is a "place for price discovery" linking buyers and sellers, said Chang Young Ho, an associate professor in the Singapore University of Social Sciences' business school. Becoming an LNG trading hub would benefit Singapore because it would attract traders and related companies, creating jobs and using local financial institutions, similar to what the country's other hubs have done for businesses, Chang added.

Singapore has already had some success in the LNG arena. There were at least 45 LNG-related companies with offices in Singapore as of March, according to the government. Still, hurdles remain.

"The challenge of establishing Singapore as a physical trading hub is that the LNG market is not fully commoditized, and indeed discharging, storing and reloading LNG still carries a cost penalty compared to optimizing on-the-water LNG flows," Sims said.

"As a small country and LNG-demand center, it would also be more difficult to create sufficient liquidity in a spot LNG DES Singapore market, compared to the much larger Japan-Korea DES market, or the U.S. Gulf LNG f.o.b. market," he said. DES, or delivered ex-ship, means that the seller delivers goods to the buyer at the port of arrival, while f.o.b., or free on board, means that the seller retains ownership until the goods have been loaded onto a ship at the port of departure.

This year, Singapore Exchange (SGX) stopped publishing its spot LNG price indexes, which were launched in 2016 as part the country's goal of becoming a hub for the gas. This was due to low participation over the past few years amid competition from more established pricing agencies, according to a Reuters report.

Instead, SGX has focused on the carriage of LNG as an internationally traded seaborne commodity. It has created three LNG freight indexes through its Baltic Exchange subsidiary in London, with the first index being launched in March 2019.