Resumption of talks defers to autumn and beyond

The newbuilding market continues to be sluggish. There have been some resale contract fixtures, however, many shipowners continue keeping a wait-and-see attitude, and very few newbuilding contracts have concluded. The summer vacation season has begun centering in European countries, and expected full-scale resumption of business talks on newbuildings defer to autumn and beyond.

Half year has passed but many of the industry people voiced on the progress of the market that "order placements for newbuildings are less than we expected at the beginning of the year," though some are of the opinion of "it is within the expectation."

Sluggishness of newbuilding order for bulkers, which are mainstay products of shipyards in Japan and China, has been continuing, and especially orders from European owners have been sluggish in recent years.

Sluggish orders on bulkers, which are the main force for the Japanese and Chinese yards, continue, especially the number of orders for newbuilding bulkers from European shipowners has remained stagnant for a few years. Some European owners and operators are placing newbuilding orders, but there are many cases of bareboat charter (BBC) arrangements that they sell their own ships to Japanese owners and charter in the same ships. New model ships completed the development by shipyards are gradually increasing but the number of successful sales of them is still small. Many Japanese shipyards carried out marketing activities for new model ships to the European owners when the maritime event "Nor-Shipping 2019" in June but, as a whole, successful deals were hardly seen.

Not only Japanese shipyards but also those of Korean and Chinese are facing difficulties to pile up newbuilding orders lately as their accomplishment rates of sales against the target number of orders so far are lower than they planned by a wide margin. In 2019, there will be more sizable negotiations on LNG vessels such as Qatar and Mozambique projects, as well as on mega-containership newbuildings. There is a hope of a turnaround in the second half of this year, but there is a risk that there will be a big distortion in schedule depending on whether or not it is possible to receive such orders of newbuildings in a lot.

Japanese yards developed new designs to meet the various regulations, and were able to book some orders in the first half of 2018, centered on those bound for Japanese and Taiwanese shipowners, but the pace was slower than expected. In light of this, there are still numerous shipyards that have not yet filled their order books with newbuildings for delivery in 2021, and it is expected that those shipyards with on hand workload for less than two years worth will be increasing. How those market players recover from such a situation in the second half will draw attention.

MOSCOW -- Russia is boosting Arctic production of liquefied natural gas to counter growing competition from the U.S. while looking to Asia's major energy importers to buffer projects against Washington's ire.

The terminal is scheduled to go online by 2023 and will supply Japan with 2 million tons of LNG annually -- about one-tenth of the facility's capacity.

"U.S. sanctions against Russia are likely to expand this year and many international investors, particularly in the West, are watching developments closely so they are not caught up in the new sanctions measures," said Elizabeth Rosenberg, senior fellow and director of the Energy, Economics and Security program at the Center for a New American Security, a Washington-based think tank.

The U.S. has already threatened sanctions on the Nord Stream 2 natural gas pipeline currently under construction in Europe, saying it increases the region's energy dependence on Russia.

That threat makes the turn to Asia more urgent. Securing sales in Japan is very significant for Russia, and lower liquefaction costs in colder regions will make Russia's Arctic gas competitive, according to Andrey Polishchuk, an analyst at Raiffeisen Bank in Moscow. "The fact that companies have been able to attract investment, regardless of whether or not there are sanctions, shows the optimism about these projects," he added.

Just days before the announcement of the Japanese stake in Arctic LNG 2, Novatek shipped its first gas to Japan from the Yamal LNG terminal, which launched in 2017. An LNG transshipment terminal scheduled for construction on Russia's Kamchatka Peninsula will enable the company to supply more LNG to Japan, Novatek Chairman Leonid Mikhelson said. 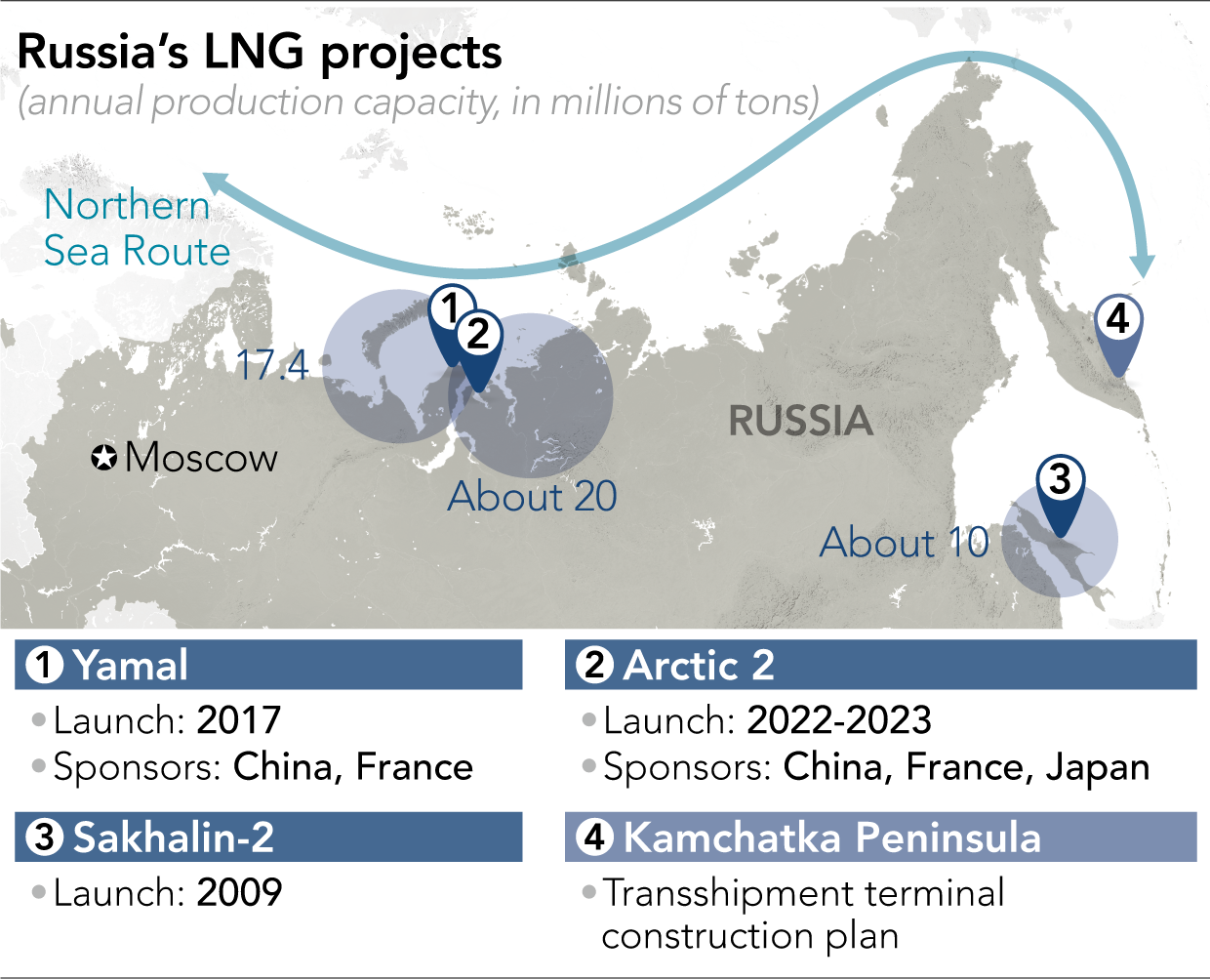 Russia aims to increase LNG output about fivefold to more than 120 million tons by 2035. Development of its Arctic reserves is key to this goal. The Asia-Pacific region will receive about 70% of production, with shipments planned via the Northern Sea route.

To support the increased exports, the public and private sectors will spend more than 1 trillion yen ($9.21 billion) on nuclear-powered icebreakers by 2024, since the route is ice free only a few months a year.

Growing U.S. shale gas production has fueled Russian efforts to lift its own LNG exports. American producers shipped 10.73 million tons of LNG to Japan, China and other Asian countries in 2018, closing in on Russia's exports of 12.86 million tons to the region, according to the International Group of Liquefied Natural Gas Importers.

The U.S. is also going on the offensive in Europe, where Russian gas transmitted via pipeline accounts for more than 30% of the market. Washington signed a long-term LNG sales agreement with Poland in 2018.

The status of Russia's Arctic producers was greatly complicated by the country's 2014 military intervention in Ukraine, after which Washington and European countries imposed sanctions that cut some projects off from Western capital.

While Japanese and Chinese companies have continued to invest in the sector, that investment could be put at risk if Russia's projects get wrapped up in additional sanctions, according to CNAS' Rosenberg. "For a capital-intensive project that will only produce profit in the medium and long term, such as a major energy infrastructure project, that could represent a painful loss," she said.

Despite that risk, the Yamal LNG project was completed without a hitch, thanks to a 30% stake from Chinese companies.

China has become the world's second-biggest LNG importer behind Japan as it shifts away from coal to cut air pollution. The stake in Russian LNG is also part of its efforts to diversify energy sources and establish a presence in the Arctic Sea amid the trade war with the U.S.

It is unlikely that Russian companies could totally avoid sanctions just by bringing in a Japanese company like Mitsui, according to Raiffeisen's Polishchuk. But even with sanctions in place, Russian projects have been able to attract funding from Japan and other countries, which indicates the value of the projects. "For investors, sanctions are really of secondary importance," he said.