Typhoon Maysak to hit Busan this week with strong winds

Maysak is likely to retain “very strong” wind speeds as it makes landfall somewhere near Busan in the early hours of Thursday, the KMA said 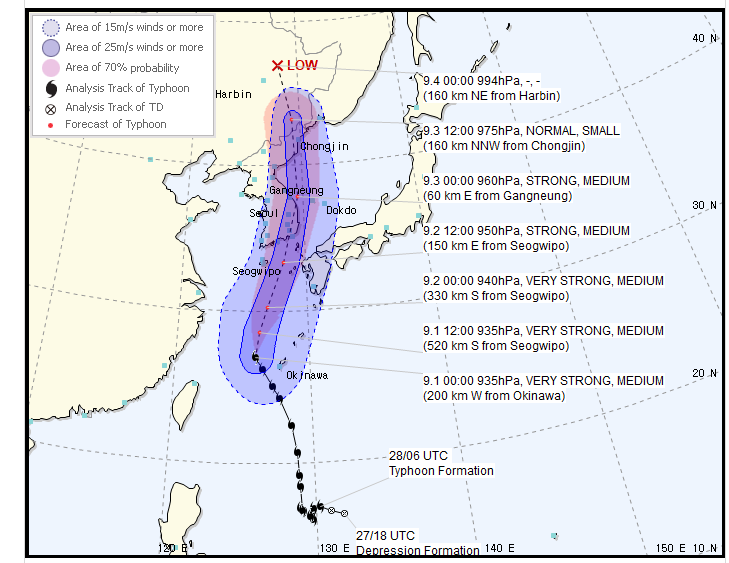 Typhoon Maysak, projected to become the second major storm to hit the Korean Peninsula this summer, is due to make landfall near Busan on Thursday with potentially devastating wind speeds, Korea’s national weather agency warned.

The cyclone formed in the waters off the east coast of the Philippines on Friday, and was moving at a pace of around 28 kilometers per hour (17 miles per hour) around 660 kilometers (410 miles) south from Okinawa, Japan, according to the Korea Meteorological Administration (KMA).

The pressure at the storm’s center measured around 950 hectopascals, the agency said.

Maysak is likely to retain “very strong” wind speeds as it makes landfall somewhere near Busan in the early hours of Thursday, the KMA said.

The storm is then projected to pass through major cities in the Gyeongsang region, like Ulsan and Gyeongju, before moving into the East Sea off the coast of Gangwon.

Jeju Island, which was not directly on the typhoon’s projected path, is nonetheless expected to be hit with rains Tuesday, as is South Jeolla. The downpour may cover the entire country by Wednesday afternoon, the KMA said.

“Heavy damage is expected from the [storm’s] wind speeds of around 40 meters per second, as well as the rain clouds forming above the inland,” said an agency official. “[We] must prepare thoroughly.”

The storm is the ninth typhoon to hit the peninsula this year, and comes after Typhoon Bavi carved a path along Korea's west coast last week.

Bavi was expected to bring the most powerful winds on record — at around 60 meters per second — with the potential to exact immense damage on the county after its longest rainy season on record. But the actual storm was significantly less destructive than anticipated, mostly affecting Jeju and coastal Chungcheong.